The big day had come.
We could not believe the timing - EXACTLY 3 years today, Our Rose was launched.
Also being "New Zealand" day (Waitingi Day) at home...

Leanne & Chris (Exit Strategy) fellow kiwis,
along with Wim, from Imtech Marine joined to be line handlers, with Dean.

Before dropping the lines at the marina,
we played the NZ National Anthem, followed by the Haka... we were ready to go.

We headed out to an anchorage called "the Flats", where we awaited our advisor.
An advisor is compulsory.  He via radio is instructed by the port operators as to when, who with and how they want us to enter the canal, then each lock.

While waiting for the advisor, Richard and "his team" set up our window protectors that he had designed and had made in the Rio Dulce.
Though we felt our windows would be ok, we weren't taking any risks.
There can be an immense amount of pressure on the side of the boat
depending on who you are rafted up to. 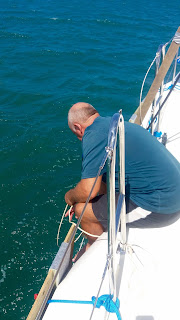 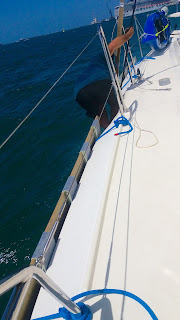 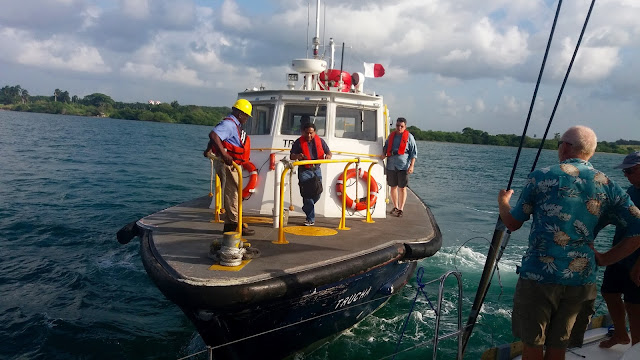 After a meeting to discuss how and when things would be done,
we headed toward the Canal.
Our advisor informed us that a mono-hull would be rafted up to us.
As we were heading downwind, (and the wind had picked up)
we said that we would like to turn into the wind for them to come alongside.
They refused this suggestion, having six Chiefs aboard the yacht (and no indians),
all managing to "yell" at once.

Richard turned Our Rose into the wind, enabling us to keep nice control of the boat
forcing the yacht to do the same if they wanted to be rafted. 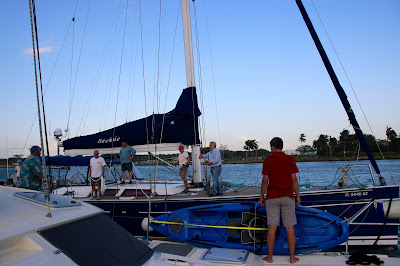 Once alongside, they refused to use our lines (ropes) to tie the boats together, what is usually done is that one boat use their ropes for bow & stern tie, and the other boat for the "spring" tie.
he agitated voices did not abate, with tension from the yacht seeping out.
Oh well, it takes all sorts!

Heading into the first lock... exciting and scary... 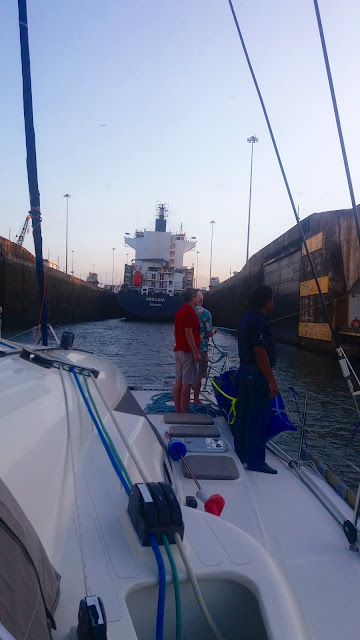 and the doors begin to close behind us... 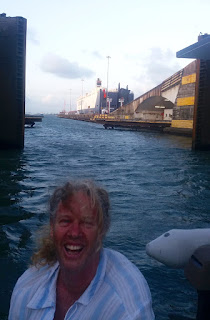 As we enter, a "monkey fist" is thrown from guys at the edge of the canal.  These are then tied off to large ropes that we have.  The ropes are then pulled back up over the walls and tied off.

As the water level raises, the ropes are very carefully let out from the boat.
Obviously there are line handlers on each boat.
In this instance, we were controlling the starboard side of the boat, and the yacht the port side.
If the ropes are let out too fast, then the boats can swing toward the walls)

Dean and Leanne doing a wonderful job of adjusting the line as the water level rises... 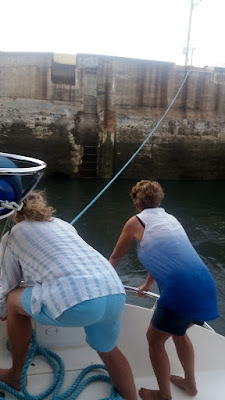 After our first lock, we look back... 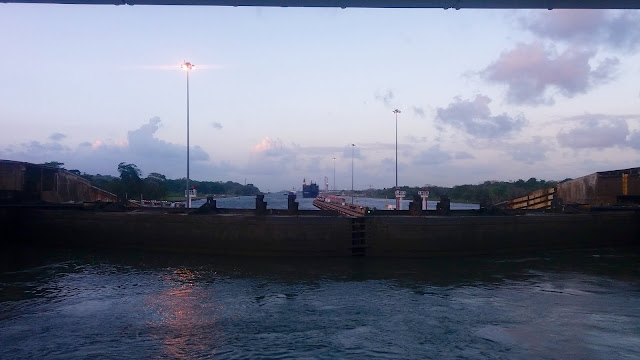 Into another lock,
darkness now upon us... Chris doing a great job doing the line at the bow 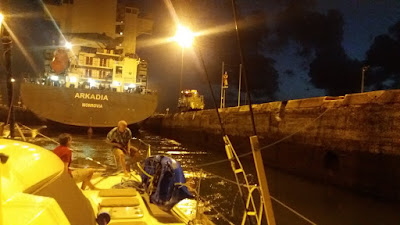 After three locks, we are now in Gatun Lake.
"Letting go" of the yacht,
we now head to the buoys where we will spend the night.
Chris and Dean jump onto the buoy to secure our lines. 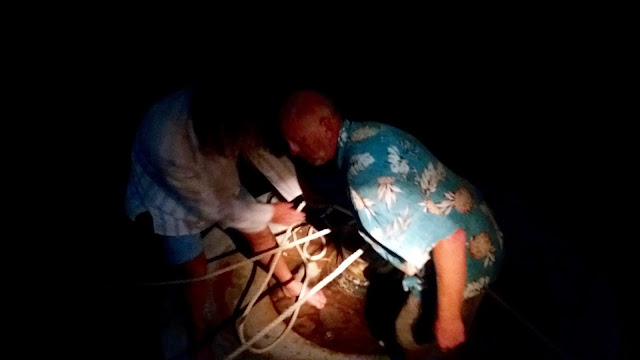 The advisor is collected and we sit down to a well deserved cold one!
As it was Our Rose birthday, we finished our "kiwi food day" with a Pav 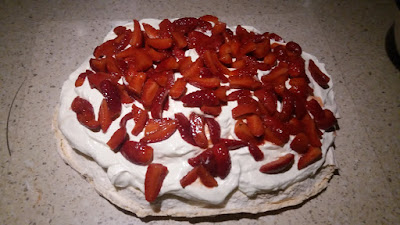 The next morning sun rises on Gatun Lake 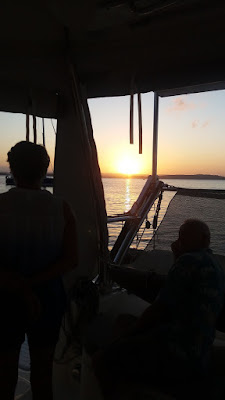 and we are ready for the final journey through the canal...

Chris and Leanne taking the helm for a while... 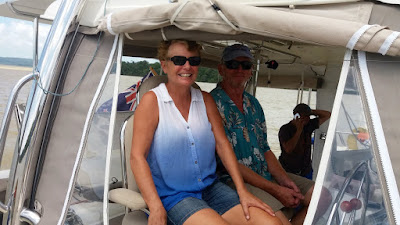 The blokes with the advisor... 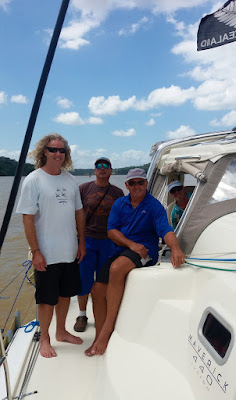 These long pipes take away the rock that is blasted to keep the canal deep
Note the color of the water...

As we are getting to the locks a little early, our advisors suggests we stop.
Dean jumps on the buoy to again secure the lines 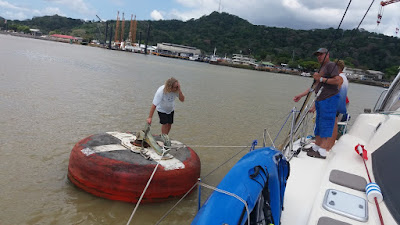 As we go to start the engines to take off again, we find that the starboard engine will not start.
Hows that for timing???
With Dean passing Richard tools, after 45 mins (15 to spare before the next lock)
Richard fixes the problem.  The pre-solenoid to the starter had failed.
(Again, our sincere thanks to Chris Wooley from the Rio Dulce who advised us to carry this spare) 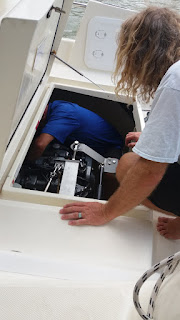 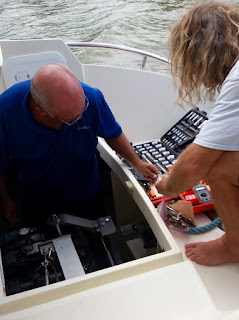 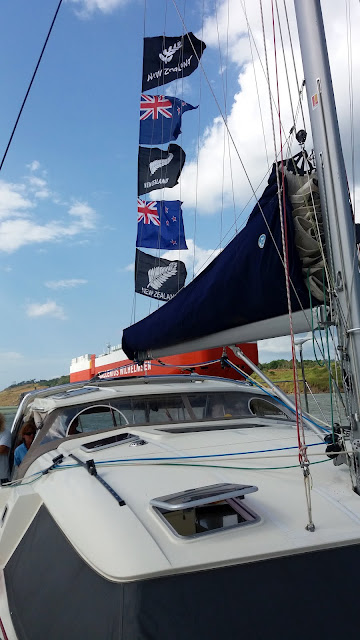 With 5 minutes to the lock, the advisor lets us know that we are to be rafted with Jigsaw.
An Australian Catamaran.  What a great descent we had with them through the locks.
Amazing what a different attitude can do! 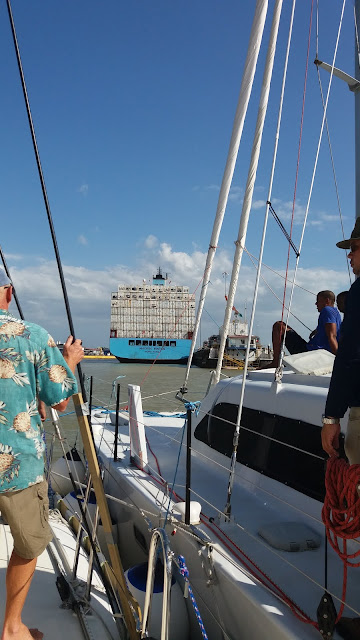 It is amazing how close these ships get 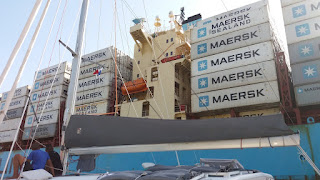 As we head into the lock 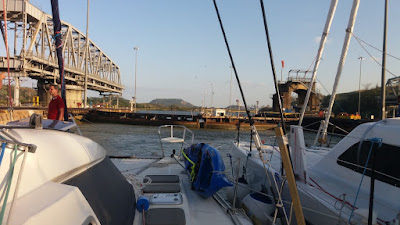 Differing from yesterday, we had large ship behind instead of in front of us... 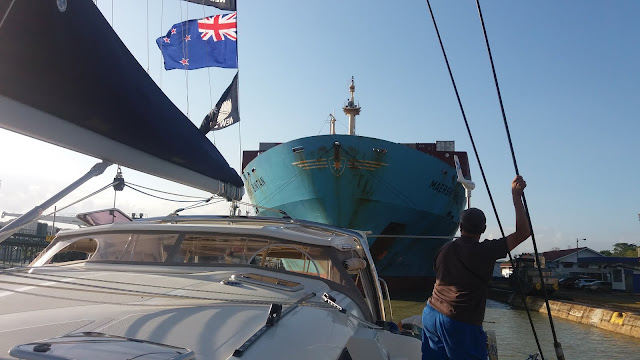 You can see with the water mark on the side of the canal how far we went down... 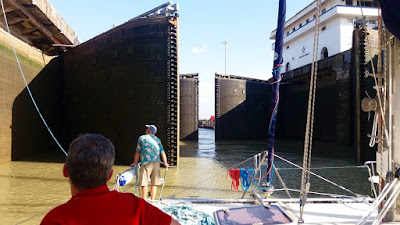 Our first glimpse of our home ocean - the Pacific... very emotional!!! 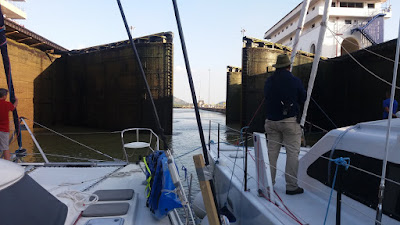 and as the gates open - we motor out of the canal. 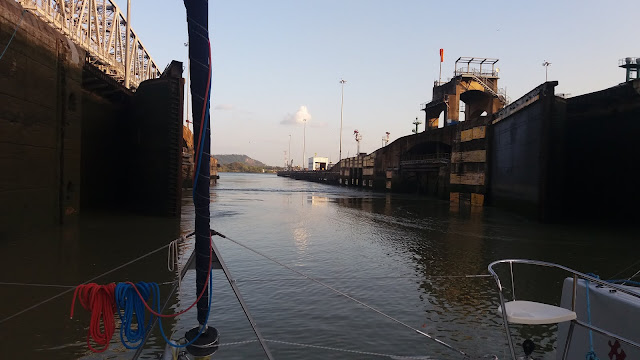 These screenshots below are taken from the live cam at the lock.
The second picture give an idea of how far down we drop... 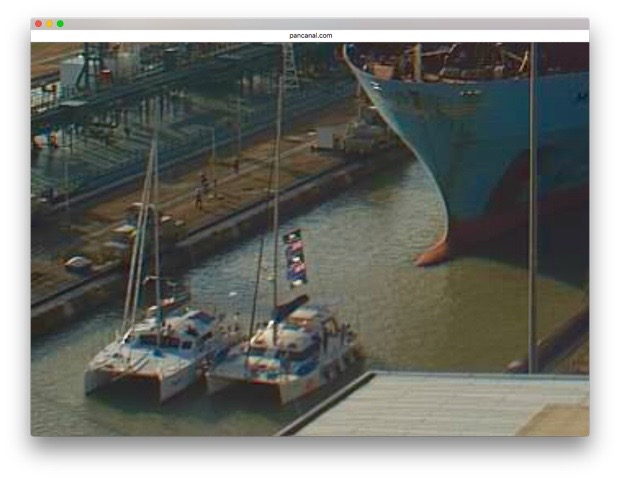 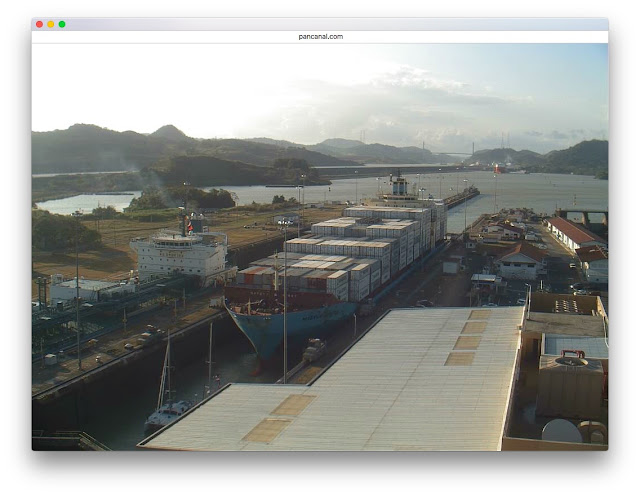